This is really primarily for Cassie, but I rarely post here, so it's also an exercise in "how does LJ work again? Or how does it work today?".

Over the weekend, I caught "Living is Easy (With Eyes Closed)", which you may recognize as a lyric from Strawberry Fields Forever. The film is in Spanish, set in Spain, about a Spanish guy who teaches English and Latin. He's a huge Beatles fan, and uses Beatles lyrics to help teach English to his students. He finds out that John Lennon is filming a movie in Spain, so he embarks on a road trip. Along the way, two youths join him on his journey.

Charming, funny, sweet, a little unexpected. I didn't exactly expect the ending, but like most road movies, and most road trips, it's about the journey more than the destination, and it's a pleasant excursion.

Hey, is this thing on?

I was just sending email to a mailing list (nothing exciting, don't feel insulted if you're not on it) that was thinking about picking up and migrating to a particular social network, rather than go on being a mailing list.

And then, I got email asking if I was safe from the mudslide in Oso, WA.

Yes, I'm safe and sound. Oso is on the North edge of Snohomish County, a mile north of me.

I trust that if you're reading this that you're also safe. And that you're something like the same strain of stubborn holdout as I am and haven't entirely abandoned LJ.

So, this past weekend, a bunch of my friends / acquaintences / teammates got together and competed in a local trivia competition. There are a few competing bar trivia formats, some having national infrastructure behind them, some having more local, some being strictly two guys in one bar running things. This weekend's competition was supposed to be a championship for something like 7 local bars, but they didn't get enough registrations, so they opened it wider, and we frankensteined together a team.

There was a round on Seattle history (pro tip: just write down street names) and one on Breaking Bad, which we somehow floundered our way through. The "flow" moment for me was when they had a round of Beatles songs, where they'd play the first few lines of the song, and bleep out a line or two, which the teams would fill in. The hardest part for me was to know when to stop writing.

That round only had 5 points available, but I nailed them all.

Then, later on, there was a musical round where I wrote down "Pressure" instead of "Under Pressure" for the David Bowie / Queen song, which I'm pretty sure is a mistake I made before.

Still, we walked away with a trophy and a pocketful of cash, each (not quite covering our food and registration, but that's cool).

(Crossposted from Google+ for Cassie's benefit.)

Back when I was buying tickets for the SIFF festival, I saw promotions for three presentations by Scott Freiman deconstructing their works - one presentation on The White Album, which I would have liked to have seen, but it conflicted with the "Says You!" tickets I already had, and then two more, one on their beginnings (not so much a deconstruction as a retelling of the origin story, and, as it turned out, better than Superman), and one taking apart "Revolver".

Both were entirely enjoyable, and I enthusiastically encourage Beatles fans that have the chance to see one of these presentations to take the opportunity.

The Early Beatles covered a lot of the early influences and how the band got from scruffy youths in Liverpool to Hamburg, back to Liverpool, and on to Abbey Road (not a straight line, by any means).

The Revolver presentation was a piece by piece analysis of what went in to each song on the album (as well as "Paperback Writer" and "Rain", which were released around the same time as a single, but not on the "Revolver" LP).

In a lot of ways, I now believe that "Revolver" represents The Beatles at their best. I'm tempted to say this is where they jumped the shark, but that's not fair - for one thing, I wasn't around, so I have history to guide my opinions. And, even if you were around then, "Sgt. Pepper's" probably seemed like a perfectly fine album, and arguably a better one. And, to be clear, I think it's fine, but you can see the band pulling itself apart into a bunch of individuals (which reminds me of The Police, but that's a different story).

Anyway, a terrific presentation, and if you're a Beatles geek (there are some of us out there, no shame to admit it), you should go to http://beatleslectures.com/ and sign up for the mailing list so that you'll know when Freiman's in town. Then, clear your calendar.

In related news, I just paid way too much for a Paul McCartney ticket. Or maybe I got a great deal to see an amazing creative force live in concert. I know I'd regret missing the show. 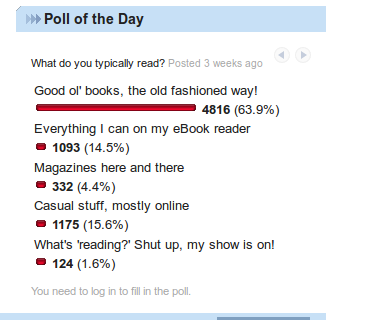 A while ago, LJ was running a survey about gun control or something. The numbers reported might have been accurate, but the bar chart they displayed representing the results looked skewed to me. They're still doing it, as the image above shows.

The bar that represents 4816 votes is 160 pixels long, which dominates the chart. Your eye sure goes to that, doesn't it? And look, all of the rest of the results are tiny, not making up a noticeable fraction of the responses, right?

Well, sort of. What's the second biggest percentage? Did you say 14.5%? Whoops, no, it's actually 15.6%, which is listed fourth. For some reason, the bars aren't sorted. Which maybe isn't a big deal...

Now, maybe the designer wants to pipe up here and say "oh, but look, we've got these rounded corners on our bar graphics, they would look bad below 9 pixels, that's why we adjusted things". To which I reply, if your graphics are forcing you to distort the math, then change the graphics. Charts should be made as pretty as possible without distorting the data.

Looking at the amount of error in each case (or, if you want to be cranky, "lie fraction"), you see:

meaning that we've got bars that are about a quarter the size they should be, and a bar that's more lie than truth. Or, hey, let's display "truthiness", by subtracting the absolute value of the above percentage from 1:

Or, hey, because this is fun, here are some charts. 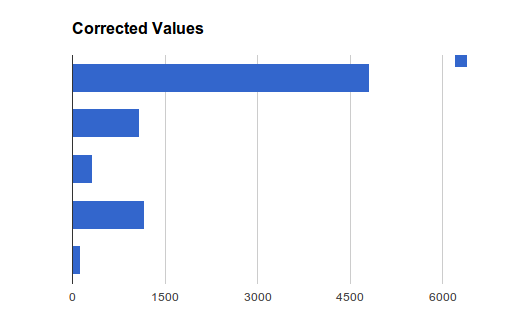 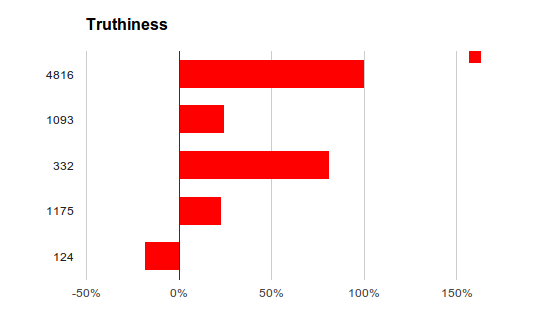 I have been baffled by the phenomenon of random anonymous spam being put into old old posts of mine. I suppose it makes some sense if you assume that enough LJ account holders don't screen their comments for spam, and if you assume that there's enough search engine robots crawling the web, looking for content. Given those two things, it's like planting seeds. Spam seeds that grow into mighty bushes bearing spam fruit.

Still, I think I figured out how to default my LJ account to friends-only comments. No more fake handbag comments!

This should have been an easier decision to make, given that there are maybe 5 people who will read this, and you're already on my friends list.

I understand that it brands me as a crazy person, like those people who didn't watch Star Wars until the 90s, if at all.

I haven't read the books, nor seen the movies, of the Harry Potter series.

Oh, people have told me that they're good. You can feel free to tell me that I should read them. Hasn't mattered yet.

On the radio this morning, I heard numerous teens interviewed, and they were saying that today marks the end of their childhood. Or that Harry Potter will live forever. Or something. I'm sure they will find that there are other books and movies to consume.

Also mentioned was that Warner Brothers was going to have difficulty dealing with the loss of the HP franchise. I'm pretty unimpressed by media conglomerates not being able to maintain their year over year billion dollar monetization of a fictional world. Really, WB, if you didn't diversify your portfolio before now, that's your fault. If you don't want to develop a new franchise, I'm sure that either Christian Bale or Daniel Craig would step in as the star of a reboot.

I suggest you get Michael Bay or Uwe Boll to direct the rebooted series, since I'm not going to see them anyway.

A bunch of recognizable locations in the pitch video for this project.

mizumarbel
Actual science may vary
How do you feel about animal research and testing? Would you buy products that have been tested on animals?
Reply 476

I don't do these things often, but this one touches on a favorite gripe of mine. Humans are part of the animal kingdom, so if a product had not been tested on animals, I would wonder what it had been tested on.

I certainly hope that my shampoo has been tested on willing human participants.
Collapse