I just got back from a halloween party. Many of the people there had something to do with the making of Total Annihilation, and if not that, certainly one or two steps removed (which includes me). 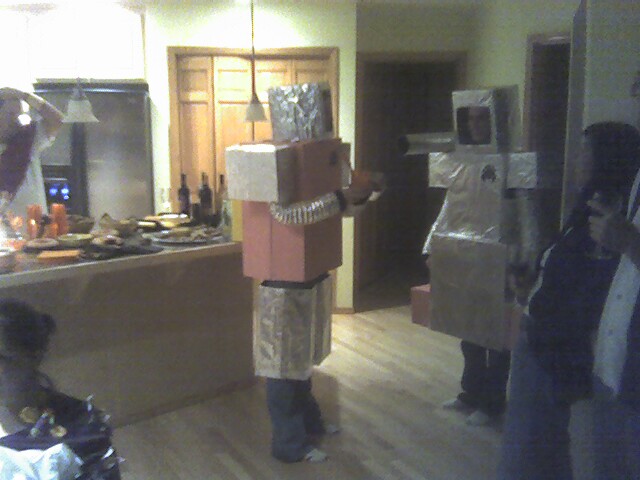 If you weren't a young boy in 1983, you might not recognize the Gyruss icon I assembled.

I've been playing that game way too much today. Over twenty years later, it still holds up (contrast with Tron, Food Fight, Moon Patrol, and to some degree (sigh) Gauntlet - each of which I've also played some today). I'm probably a little too charitable to Gyruss and a little too hard on Gauntlet - each of them has somewhat primitive gameplay by today's standards. (Imagine that!)


Gyruss is not much different from Galaxians or Galaga, if you were to take the rectangular screen of those games and fold it around and project it down the cylinder of Tempest. Remember Tempest? If you've played any of these games, you'll know the pattern - waves upon waves of enemy ships fly onto the screen, shoot at you, form up into an array that's easy to shoot at, and then they come back to shoot at you some more.

Gyruss differs in that the player can move in a circle instead of just along the bottom edge of the screen (which makes little difference to gameplay), and that successive screens of enemies are measured against a trip from the outer reaches of the solar system (2 Warps to Saturn).

Really, I think the one thing that really makes Gyruss shine is the spirited soundtrack. Catchy and intense, the music adds the right level of panic to what might otherwise be a forgettable shooter.

ETA: Here is a MIDI clip of the music. I like this arrangement of T&F in D Minor.
Collapse