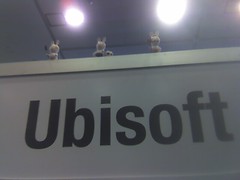 A little bit different format today, because I'm back home and not posting with the limitations of a tiny keyboard on my cell phone.

Stuff I saw on Day 3:
- I went to an entertaining "presentation"; a gameshow called "The Metagame". The idea was that, like Scott McCloud's terrific comics-as-media-for-examining-comics, it made sense to use a game to provoke discussions about games. This game was structured so that at every "move" players were making a comparative statement about two specific games, like "Halo 2 makes better use of sound than Lemmings" or "Oregon Trail inspired a more intense fan culture than Street Fighter". It was an interesting idea, and the winners and losers didn't matter so much as just discussing the various games. I could see this being replayable and extensible outside games per se (at which point, it loses its introspective nature, but that could be OK).

- Valve had a good discussion about multicore programming, and the necessity of taking multithreading seriously as a fundamental architecture, as opposed to a scarcely-used tool in a programmer's repertoire. This gave me plenty to chew on and lots of assigned reading homework to catch up on.

- There was a presentation given by a panel of AI programmers, talking about extending Halo 2's decision-tree AI system into Spore, Halo 3, and some Vivendi Unreal shooter I didn't recognize. This, too, gave me some good ideas, and added a couple papers to my reading list. I'm satisfied that people have taken some of the ideas I was exploring in college and reshaped them into something usable. Thanks for the heavy lifting, guys!

- Chaim Gingold had a presentation which was the closest thing to a Will Wright talk, both in terms of content and presentation. His discussion was looking at the "possibility space" of a tool (Maya has a huge space; it can model almost anything. Sim City has a smaller space; it can only model cities), the "probability space" of a particular user with that tool (put a random guy in front of Maya, he won't produce much, and it'll be a different set of stuff than a trained 3d artist would create), and the "desirable space" (harder to define, but if you can make a tool that makes it easy to create good stuff and hard to make bad stuff, you've won). The basic idea isn't hard to grasp, but I appreciated the vocabulary for the discussion, and the examples of how Maxis has struggled with the tools they'll be providing Spore players.

- Ernest Adams wrapped up GDC 2007 with a talk on "Rethinking Challenge in Games and Stories". The title should remind the reader that Adams is interested in non-game entertainment as well as games. He underscored this distinction, enumerating 10 kinds of features that create entertainment, with gameplay being only one item on the list. He encouraged the audience to consider exploring the other nine categories and seeing if they could support an experience without relying on achievements and challenges. One quote: "You are supposed to play Far Cry if and only if you want to shoot people before they shoot you". Which, on the face of it, seems like a reasonable assumption. Far Cry is, after all, a shooter. But it's also a lavish synthetic environment, so one might want to explore it in a different fashion. Far Cry isn't a game that affords non-shooting-oriented exploration, but you can imagine a "virtual tourism" title that is as lavishly rendered, and is as entertaining, but doesn't have "assholes trying to shoot me every 30 seconds".

- On the flight home, the three seats across from me were taken up by Penny Arcade folk. I handed out some business cards, and one of the guys tried to guess where I worked based on a short "twenty questions" barrage:
"Microsoft?" "No"
"Nintendo?" "No. We're going to be here all night at this rate."
"What format?" "Handheld, I guess."
If I owned a Nintendo DS, I would have been welcome to play wireless minigames with Tycho and crew, but instead, I watched a movie on my iPod.


And now, I have a scratchy throat and a bit of a headache. But I slept in my bed, and I've got a hardline to the Intertube, and all is well with the world.
Collapse