So, a week ago was it? I said I was going to get the yard into shape before Mother's Day. I still have time. 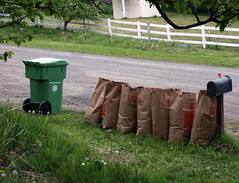 However, I did manage to get some mowing done - an hour or so last night, and two hours this afternoon. I'm not done, but it's something.

Another thing I did today was to watch "Who Killed the Electric Car". I'm getting into a habit of watching documentaries that I know will make me mad. In this one, the Saturn EV1 is discussed, a beloved but little-known car that not only was taken out of production, it was taken back from happy customers. A GM executive promised that the cars would be sent to engineering departments of universities, to museums, to GM engineers, and disassembled to be reused. Instead, they were crushed and shredded, even when enthusiastic fans raised $1.2 million to purchase the last 80 EV1s in California.

One of the most disturbing bits of the documentary is that one of the many reasons that contributed to the downfall of the electric car was the possibility of hydrogen as a viable alternative. I think it's a potential alternative, but it's clearly not ready for customer use, not like the all-electric cars as of 2003, and not like the gas-electric hybrids on the roads today. The good news is that it seems that the car companies are now recognizing that gas-electric has customer demand, and the technologies are there such that they can sell them without going out of business. Even better news is that car companies are reprioritizing the responsibilities of the gas and electric parts of the design, so that you can get a car that's essentially an electric car, but retains the internal combustion engine for exceptional use cases (e.g. trips longer than 120 miles). That's in the works for cars coming out in the next few model years.

And, if you're feeling like voiding your warranty, you can take your current-generation hybrid car, and retrofit it into being a "plug in hybrid". I don't currently have a hybrid car - I was on the fence between getting a Honda Insight and a Subaru Outback something like 7 years ago. If someday it makes sense to get a smaller car (because how often do I need to carry cargo and passengers?), the sentiment on this bumper sticker resonates pretty strongly with me.
Collapse