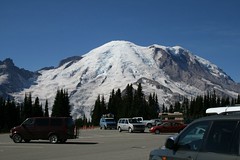 After having wrapped up the game-in-a-week-geekfest, I decided to take Sunday to get far away from my computer, and the Sourdough Ridge seemed like a place close enough to get to easily, but pleasantly far away in mental space so I could clear my head.

I was hoping to get out of the house early (Before 7? Craziness.) but I ended up getting on the road around 8:30. The drive to Sunrise was pleasant and uneventful - no signs of storm damage from last winter's flooding that took out roads and entire campsites on the south side of the park.

One thing that keeps amazing me is how large and close the mountain looks from Sunrise - there's some optical illusion where I see the buildings at Sunrise, and I see the mountain, and there's nothing in between, so my sense of scale is completely blown out. Normally, large things are far away, and there are visual landmarks between them and human-scale objects. At Sunrise, there's a building, and then there's the mountain, as though it was in somebody's back yard.

I wandered around the visitor's center and had a quick lunch at the snack bar before loading up and getting on the trail. I knew that I wasn't in optimal shape for the trail - it's been I don't know how many months where my hiking boots have been collecting house-dust instead of trail-dust. The first bit of the trail takes you up from the Sunrise parking lot up to Sourdough ridge, and it's not much elevation, but it was enough to remind me to slow down - I'm used to sitting in front of a computer at sea level, not hiking at 6000+ feet.

I reached the top of Dege Peak (at this point, I wasn't sure how to pronounce it, DEG-gee, DEEZH, or something else), and chatted with a couple groups of hikers who were proud to have got that far. And it's an impressive view:

You can see Rainier clearly, of course, and surrounding ridges and basins. Really spectacular. I was lugging my tripod up there specifically to take the above panoramic shot. I'll need to register Autopano Pro to get rid of the blue watermarks marring the picture. 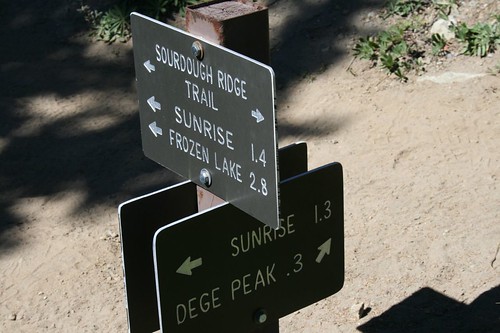 From there, I went down the .3 miles from Dege Peak back to the Sourdough Ridge trail and turned left towards Sunrise Point. This was about 1:00, and I decided that if I started getting tired, or it got to 2:00 before I reached the trail, I'd turn around to give myself ample time to get back. It was pretty much downhill from the fork to Sunrise Point, so I made that distance comfortably in about half an hour.

Along the way, I passed a woman with no legs, um "hiking"? the other direction. She had a stubby little hiking stick. Impressive.

A brief rest at Sunrise Point to take a breath and drink a fair amount of water, and I was back on the trail. The downhill into Sunrise Point that made the previous leg so quick was paid back by a strenuous return trip - it wasn't hard, I just ended up going a lot slower than I expected.

I passed by the fork up to Dege Peak, and told myself that it was all going to be downhill from there. Well, no, ridge trails don't usually work that way, they go up and down along the undulations of the landscape. I was getting exhausted, but I eventually started seeing the parking lot, and began measuring my progress by guessing at the angle between the trail direction and the direction to my car - that initial climb from Sunrise went North/South, and the ridge trail runs East/West, so there's a right triangle, sin, cosine, tangent... as I was farther away from the car, that N/S leg was small, so the angle between the direction to my car and the direction on the trail was small, but as I would pass through clumps of trees, the parking lot would come back in view, now it's 30 degrees, now it's more like 45, 60, maybe 80, and by that point, I was on the final downhill to the parking lot and the car.

I didn't get a picture of it, but I saw quite a lot of Western Anemone and I tried hard to recall the name for the flower. It looked a great deal like a goatee tacked onto a plant, so I was thinking along the lines of "goat's beard" or "old man's beard" - I stopped by the Visitor's Center and the cute ranger informed me both that the peak was DAY-gee peak, and the flower I was talking about was the seedpod for the Western Anemone. Wouldn't have recalled that on my own.

A good trip, and a reminder that I need to get out on the trail more.

It's always nice to have your boss call you up at 8:00 at night and tell you this.


He just played the marble game and loves it. He asked for my permission to show it to some people. People I can't mention here, but hey, you know - people.

And here, I was feeling guilty about not being as productive at work last week because of my after hours project.

Oh, here's email from him, CCed to the company:

"This is a friggin brilliant game dave. Kudos."


It's nice when your boss appreciates you.
Collapse